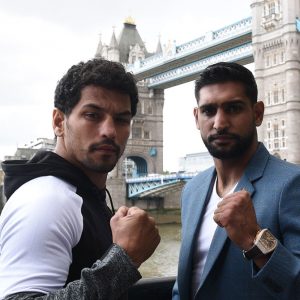 London, UK (31 May 2019) Boxing icon and global sporting phenomenon Amir Khan will make history when he fights in the Kingdom of Saudi Arabia on Friday 12th July, 2019.

As the biggest Muslim personality in sport since Muhammad Ali, Khan will become the first high profile Muslim boxer to showcase his skills at the King Abdullah Sports City in Jeddah – nicknamed the “The Shining Jewel” in a fight that promises to elevate the Kingdom as a major sporting attraction.

The fight is an important event taking place during Saudi Seasons that will run from 8 June-19 July that aims to transform the Kingdom into one of the most important tourist destinations in the world.

As a devout practitioner of the Muslim faith and sporting role model, Khan’s presence in Saudi Arabia, home of the Two Holy Mosques in Makkah and Medina, promises to transcend cultural boundaries, capture the imaginations of the millions of citizens living in the MENA region and reach a truly global audience.

British Muslim Khan has thrilled the boxing world with his exhilarating all-action style since he burst onto the world stage at just 17 when he heroically battled his way to a Silver medal at the 2004 Olympics in Athens, Greece.

In a stunning 38-fight professional career, Khan has become a Two-Time World Champion and has faced some of the very finest boxers and pound-for-pound best of his generation, including Marcos Maidana, Zab Judah, Danny Garcia, Saul Alvarez and in his last fight Terence Crawford.

Khan’s rival Goyat is a phenomenon in his home country.  Hailing from Chandigarh, Goyat is a pioneer in helping to establish professional boxing in India.  He left behind a highly successful amateur career to pursue his dream of becoming a professional boxer and show the world that India can be a new super-power in world boxing.  To that end he has fought in numerous countries, including China, Thailand, South Korea, Mexico and Canada and currently holds the WBC Asian crown.

Amir Khan said, “This is an exciting challenge that I have ahead of me. It will be the first time a British Pakistani will fight an Indian boxer, which eventually will bring the two nations together. I would like to thank the Saudi government and General Sports Authority for giving me this opportunity and I’m a firm believer in sport being a great healer.”

Neeraj Goyat said, “This opportunity is as big as it gets for me. Everything that I have achieved to date wouldn’t matter when I enter the ring on July 12 taking on a seasoned, established superstar in Amir Khan. I will be carrying the hopes of 1.2bn on my shoulders who will expect me to bring the title by causing an upset.”

The fight, officially endorsed by the Saudi General Sports Authority, fits into the Kingdom’s Vision 2030 Strategy, which was launched in April 2016 to rapidly modernise the country.

Saudi’s energetic young HRH Mohammed bin Salman Crown Prince, who is spearheading the Strategy, is determined to see his country move away from oil dependency towards a future that focuses on economic diversification, innovation and the creative self-fulfilment of its citizens.

He has made revolutionary changes in The Kingdom such as the empowerment of women to more effectively participate in the growth of economic reforms.  The Crown Prince recognises the importance of utilising the power of sport to encourage social change and his vision to enhance international arts to enhance his nation’s reputation on the global stage.

The Kingdom is quickly becoming a major hub for international sporting events.

In early 2018, Saudi Arabia held its first international motorsport event, the two-day Race of Champions. It then staged its first international boxing event, when the World Boxing Super Series Super-Middleweight final took place in Jeddah in September. Following on from this, The Kingdom hosted Neymar and his footballing superstar compatriots when Brazil faced Argentina in the “Superclasico de las Americas” in October. In December, the Formula E season kicked off with a memorable race around Ad Dirriyah.

Since the turn of the year, The Kingdom has hosted the Italian Super Cup clash between Serie A Champions Juventus and AC Milan, and the inaugural Saudi International golf tournament, which saw the world’s top players, including Dustin Johnson and Justin Rose, compete at the Royal Greens Golf and Country Club in King Abdullah Economic City.

This momentum will be taken to a bold new height when Amir Khan steps between the ropes in Jeddah, Saudi Arabia.