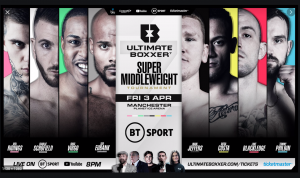 London, UK (14 February 2020) – Ultimate Boxxer the all-action and entertainment professional boxing brand has today announced the eight Super Middleweight fighters set to compete on Ultimate Boxxer 7 – the seventh instalment of the series, which is taking place at Manchester’s Ice Arena on Friday April 3.

Ultimate Boxxer 7 will see some of Britain’s top Super Middleweights come together over the short format including Seb Eubank, Mark Jeffers and Diego Costa as they battle it out to win the Golden Robe.

The event will be broadcast live in the UK on BT Sport.

Tickets to Ultimate Boxxer 7 are on general sale now and can be purchased via Ticketmaster. Ticket prices start from £25.

All eyes will be on British fighter Seb Eubank, who will put it all on the line in one night. With a host of amateur boxing fights and MMA bouts to his name and with a surname that is set to turn heads amongst the boxing community, he has everything to prove as he looks to continue his unbeaten professional record in the ring. Those that train closely with him say that he definitely has the famous Eubank knockout power.

At just 22 years old, Manchester’s Mark Jeffers (11-0-0) will enter the night full of confidence following his Central Area title win in his last fight. With 11 wins from 11 fights, he goes into the tournament as one of the favourites with comparison’s already being made to Ricky Hatton- with many tipping him to go to the very top in the sport.

Unbeaten Idris Virgo comes into the tournament entering the peak of his career. Best known for his appearance in Love Island back in 2017, he will be determined to be taken seriously in the professional sport with his exciting style and personality.

Knockout artist Diego Costa who hails from Brazil via Manchester (7-0-0) joins the tournament with the best knockout ratio on the card. He is yet to taste defeat in his professional boxing career and his explosive nature is sure to excite fans as he looks to maintain his unbeaten record.

Next up is former Commonwealth Super Middleweight Champion Luke Blackledge who fights out of Darwen, Lancashire. Blackledge brings the most experience to the card and will be seeing this as his last chance to hit the big time.

Representing Scotland is the current Celtic champion, Tommy Philbin who returns to his favoured super middle weight and will be looking to return to winning ways when he steps back inside the ring after experiencing defeat for the first time in his last fight.

Other fighters set to compete in the tournament include Charlie Schofield (15-1-0) who fights out of Aston under Lyne and Scotland’s Tommy Philbin (13-1-0), both of whom are coming off losses and will be aiming to prove they have what it takes to win.

Finally, two Manchester based fighters complete the line-up. The established Charlie Schofield who holds a very impressive fight record of (15-1-0) and stands at 6ft 3 inches tall. And 22-year-old Ben Ridings, the youngest fighter in the tournament who will be looking to maintain his unbeaten record in front of his own fans.

Four quarterfinals of 3 x 3-minute rounds will be followed by two semi-finals before one grand finale to determine who will take home the title.

The draw for the quarter final pairings will be announced in the coming weeks.

Attention now turns to Ultimate Boxxer 7 which will see the Ultimate Boxxer series return to Manchester for the second time in six months. On that night Nick ‘Wild’ Webb was crowned the winner of Ultimate Boxxer 6 coming out on top on points against Mark Bennett in front of a 4,000-capacity crowd.

“This time we wanted to bring a group of high-profile names to the card and it’s stacked with homegrown unbeaten British talent. There is no doubt this is our highest quality card to date.”

He added: “Ultimate Boxxer has already proved it’s a platform for boxers to go and compete at the very top of the sport. Shakan Pitters, Mikael Lawal and I hope Derrick Osaze will all be fighting for British titles. This year there will be even more opportunity for our winners’

With a fight card stacked with homegrown talent and six fighters going into tournament unbeaten, Ultimate Boxxer 7 promises to be an unforgettable night of high-octane explosive boxing action for boxing fans and casual fans tuning into the event.”