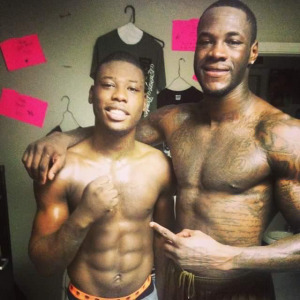 London, UK (20 February 2020) Ahead of the big Deontay Wilder-Tyson Fury World title showdown this Saturday night, London cruiserweight hotshot Isaac Chamberlain has told of what it’s like to take a punch from one of the hardest hitting heavyweight world champions in history.

The 25-year-old from Brixton was selected by Wilder to help him prepare for his WBC World Heavyweight title challenge against Bermane Stiverne in 2015 that he won on points  to begin his now five-year reign.

Wilder possesses freakish power in both hands that have iced 41 out of 43 opponents and every fighter who has taken a shot from him in a fight or in sparring – from David Haye to Tyson Fury – has talked about his almost super-natural power.

Chamberlain said, “At the time I was 20. It was just amazing. I remember in the hotel room just after we landed. They said, ‘Guys just so you know Deontay really wants this world heavyweight title’. It was before Bermane Stiverne and they brought me in for the speed and agility. They were like ‘Deontay really wants to win this world title so he’s going to go really hard so if you want to go now is the chance’. For me now I was treating the sparring sessions if I was preparing for a fight. I was the first person in and I did well. Some of the sparring partners were trying to get a bit tasty and he would ice them out. I was thinking to myself, ‘What the f***?’. The second time we were there in sparring they said they were only going to use me that day. I think it was because I done better all the sparring partners that day. I remember he did one thing that was completely different, I left myself open after throwing a jab and he threw a right uppercut. Everyone was surprised I was still standing. He hit me that hard I thought I was back in London! He’s a really cool guy, he would speak with me after and tell me what I should work on. He was a great person to spar with.”

The pair became great friends during Chamberlain’s time sparring with Wilder in Alabama and still stay in contact now.  He added, “It was great. We would go out to eat like a family. Even me and Deontay speak now. We message each other. It was a great experience being out there and sharing a ring with him and becoming friends with him.”

‘Chambo’ has also spared with the IBF, WBO, WBA Super World Champion Anthony Joshua and described the different types of power between the two kings of the division.

He said, “I think Wilder and Joshua’s power is very different. I’ve sparred Joshua as well. Wilder’s is like a sniper rifle, if he hits you then you’re going to go to sleep. Joshua’s power is like sledgehammers. Wilder you want to go sleep instantly and I have seen him do that. It’s a sharp pain, rather than a big blow like Joshua. It was a great experience for me. I was one of the best sparring partners they had. They wanted to sign me because of how well I did in the sparring.”

Going into the rematch between Wilder and Fury, Chamberlain finds it a very hard to call a winner. He said,  “I don’t know, I really don’t know. Just because of the opposition Wilder has faced, Tyson Fury had that massive cut too so I don’t really know what will happen. I will edge to Wilder, especially because he’s my boy.”

Chamberlain (10-1-0, 4 KO’s) recently signed a long-term promotional deal with renowned promoter Mick Hennessy of Hennessy Sports and will feature on two shows within four weeks as he kick-starts his career and gets back on track for a World title shot.

First he features on the undercard of Shakan Pitters against Craig Richards for the British Light-Heavyweight Championship at the Coventry Skydome on Saturday 28th March and then on the undercard of Alex Dilmaghani’s challenge for the European Super-Featherweight title against Champion Samir Ziani on Saturday 25th April at the National Sports Centre, Crystal Palace. Both fights are exclusively live in the UK on free-to-air Channel 5.

He added, “Signing with Hennessy Sports is a big thing for me. I will fight on Channel 5 which is free TV. It’s been a long-time coming. I’ve had a lot of interest since I signed with Hennessy. It’s good. I’m excited. I’m excited for the next stage in my career. He has a track record of building great fighters like Tyson Fury, Carl Froch, James DeGale, Darren Barker, Junior Witter, Chris Eubank Jnr. I definitely believe this is the right moment and right step in my career.”