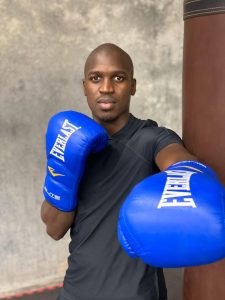 Under the two-year agreement, Cissokho will wear Everlast boxing gloves in his fights and train exclusively using Everlast’s specialist boxing equipment.  Through Cissokho’s role as a global ambassador, he will be a key driver of Everlast’s worldwide expansion and in particular into the European market through content generation, direct to consumer and retail marketing initiatives.

The 28-year-old was born in Dakar, Sengal, and arrived in France as a four-year-old in Villiers-le-Bel and now currently resides in Paris.  Cissokho excelled as an amateur with over 150 fights through the cadet, junior and senior ranks, before culminating in captaining the French national boxing team in 2013 until 2016 where he captured Bronze at the Rio Olympics in the welterweight division.

Turning professional in 2017, Cissokho has forged an unbeaten record of eleven wins and seven knockouts and captured the French Super-Welterweight Championship last year.  Managed by Two-Time World Heavyweight Champion Anthony Joshua’s 258 Management, Cissokho made his entry into the US market at the iconic Madison Square Garden in New York last June with a victory over Vladimir Hernandez on the undercard of Joshua’s fight against Andy Ruiz.

The highly talented Cissokho with his natural athleticism, hand speed and power in both hands, has been heralded as one of the most exciting prospects coming through in the sport today.   His sublime skills were recognised early in his career when in just his seventh fight he defeated the vastly experienced former World Champion Carlos Molina.

Cissokho is thrilled to have Everlast in his corner as he continues on his path towards World title contention.  He said, “I am delighted to be joining the Everlast family. These are difficult times for us all so to officially have their support today is extra special. I can’t wait to get back out there and use the gloves for real!”

Chris Zoller, Everlast’s Vice President of Marketing and Product Development, said, “We’re delighted to welcome Souleymane onto the team. He’s a very talented fighter with an exciting career ahead of him, but also one who embodies the values of discipline, character and determination which really caught our eye. We look forward to doing big things together both in France and on a global scale.”

To keep updated on Souleymane Sissokho and other #TeamEverlast fighters, head to: www.everlast.com/pro-team.

The preeminent brand in boxing since 1910, Everlast is the world’s leading manufacturer, marketer and licensor of boxing, MMA and fitness equipment. From legendary champions Jack Dempsey and Sugar Ray Robinson to current superstars Benson Henderson and Deontay Wilder, Everlast is the brand of choice for generations of world champion professional athletes. Built on a brand heritage of strength, dedication, individuality and authenticity, Everlast is a necessary part of the lives of countless champions. Based in Manhattan, Everlast’s products are sold across more than 75 countries and 6 continents. For more information, visit www.everlast.com