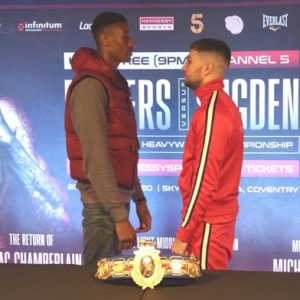 The Newark fighter met with his 6’ 6” Birmingham rival for the first time at yesterday’s press conference at Coventry’s famous landmark The Belgrade Theatre, although they didn’t strictly meet ‘face-to-face’ with Pitters towering over the 6ft Sugden.

Not only will Sugden (11-1-1, 4 KO’s) have to deal with a six-inch height deficit in the fight, but he’ll also have to contend with Pitters’ staggering 85 inch reach – 10 inches more than Sugden.

However, Sugden’s not bothered with his physical disadvantages and will instead focus on his own game plan and has promised to smash Pitters’ body with a ferocious and relentless attack to his ribs from the first bell.

The 25-year-old says he’s faced even taller opponents than Pitters when he was on the kickboxing circuit and knows exactly how to deal with him.

“His physical advantages are plainly obvious and it would be stupid of me to try and box him,” Said Sugden.

“The only way to get to Pitters is to stick to him like glue and smash away at his body until it breaks to make him drop his hands and then I’ll nail him with the head shots.  It’s like chopping down a mighty oak tree with an axe, it will take some time but that tree will eventually fall.”

“I’ve always been a good body puncher and have stopped a few that way in my fights.  I’ve faced much taller men than Pitters in kick-boxing fights, especially those boys from the Eastern block, real beasts from the east, nearly 7ft tall and you have to get past the kicks and knees to get into range.  I’ve overcome them and I’ll do the same and overcome Pitters,”

“Pitters is tall and lean and once I get inside his jab and start working away at his ribs he won’t be able to keep me off him.    I’ll be all over him like a shark feeding on a whale carcass.  I won’t give him a moment to catch his breath and once I cut off the oxygen to his lungs then it’s my fight,”

“Winning the British title means everything to me.  It’s a dream to receive this shot and I’ll put everything I’ve got into this fight, nothing will be left to chance.  This shot may not come around again so I’m making sure I leave the ring with that belt.”